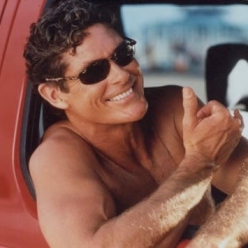 David Hasselhoff needs to explain himself. I still don’t have a talking car named Kitt and who on earth gave him permission to sing? Let’s see what he had to say for himself in this week’s instalment of Face to Faux:

Jessseeker: May I call you David? Or do you prefer ‘The Hoff’?

Hoff: ‘The Hoff Father’ is fine.

Jessseeker: Knight Rider rocked. Did you find your role as Michael Knight demanding?

Hoff: It was tough. You have no idea how tough. I had to talk to a car – and a watch.

Jessseeker: You also achieved huge success and notoriety with Baywatch.

It was well received internationally and has been shown in over 140 countries around the world. According to the Guinness Book of World Records it is the most watched TV show in the world. What do you think was the key to its phenomenal success?

Jessseeker: Yes, that’s certainly why my brothers watched it. For Pamela Anderson’s heart.

Moving on – did you nick the baseline from the YMCA for your hit Crazy for You?

Hoff: I really have no idea what you’re talking about. Stop talking. Don’t hassle the Hoff.

Jessseeker: So, whilst we’re on the topic of bad music – what is the most embarrassing album you have ever owned?

Hoff: Probably my first album, ‘Night Rocker’. It was awful! It sold six copies, I bought five. It was number one in Austria though. Wherever that is.

Jessseeker: With a reported fortune of over $100,000,000, have you ever considered investing in singing lessons?

Hoff: Why bother? The Hoff’s got talent. I’m huge in Germany. 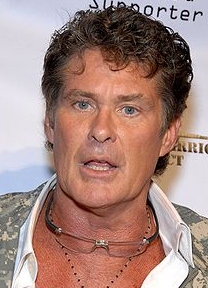 Jessseeker: In May 2007, a home video clip surfaced of you not looking your best. It showed your drunken attempt to eat a cheeseburger on the floor of a Las Vegas hotel room. Where were your table manners?

Hoff: I’d left them at home, along with my sanity. It was a low point. So were the many photo shoots in which I wore nothing but a black thong and a smile. I can only apologise.

Jessseeker: I couldn’t help but notice – the personalised photo prints of you on your website have been marked down in price. Are you disappointed by the lack of demand for images of you in a camp fur-lined robe?

Hoff: I felt there was a gap in the market. Turns out, there wasn’t.

Jessseeker: Final question then Hoff Father. Would you agree that your cameo appearance in The SpongeBob SquarePants Movie was the pinnacle of your career?

Hoff: It’s a close call, but I’d say being serenaded by David Johnson on America’s Got Talent just beat it. He offered to spoon me the whole night through – even if I had the flu.

Life just doesn’t get better than that. Well, maybe if I had a cheeseburger…

9 thoughts on “Face to Faux with The Hoff”